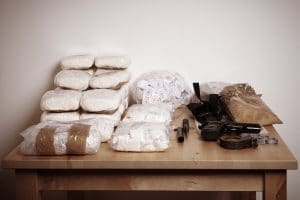 Drug trafficking involves the unlawful sale, distribution, transportation, manufacturing, and import/export of controlled substances. This is a federal and felony crime and much more serious than drug possession. Also called drug distribution, penalties for conviction for drug trafficking can vary widely depending on the type of drugs involved, the quantity, and the geographic area of distribution. An individual can face anywhere from three years to life in prison, which is why it is so important to have an experienced drug trafficking defense attorney on your side.

What is drug trafficking?

Although the national conversation is moving more toward treatment and rehabilitation for drug offenses rather than prison, federal authorities still look harshly on drug trafficking offenses. Under 21 U.S. Code § 841 – Prohibited acts,

“It shall be unlawful for any person knowingly or intentionally—

What are common drug trafficking charges?

Regardless of the charges you may be facing, you need a strategic, smart drug defense attorney on your side, as penalties for federal trafficking can be severe and life-altering.

What are the penalties for federal drug trafficking?

Federal drug trafficking penalties vary widely depending on the specific circumstances. Following are a few examples and the potential federal penalties for a first offense. Second or third offenses will result in even more severe penalties. For a full list, see here.

The DEA also notes that “The minimum sentence for a violation after two or more prior convictions for a felony drug offense have become final is a mandatory term of life imprisonment without release and a fine up to $20 million if an individual and $75 million if other than an individual.”

For a successful conviction of federal drug trafficking, prosecutors must prove three things beyond a reasonable doubt:

Your attorney can employ a variety of defenses to protect your civil liberties, starting with whether or not your search and arrest violated your Constitutional rights. Regardless of the circumstances of your arrest and the charges against you, your first step should be contacting a criminal defense law firm as soon as possible.

At the Mary Beth Harrell Law Firm, we provide experienced, reliable criminal defense. If you are facing drug trafficking or possession charges and don’t know where to turn, turn to us. We can help. To set up a consultation, call us today at 254-680-4655 or visit our contact page. We proudly serve clients from our offices in Killeen and Copperas Cove.