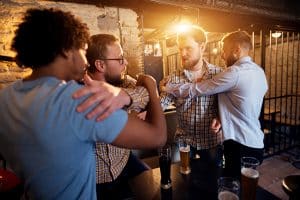 t’s a common scene on television and in the movies. Two patrons get into a fight. In the old days of TV westerns, they might resolve their differences in a gunfight. Some shows and films would have a fight that escalated into involving everyone in the bar. A common scene shows one patron sliding completely across the bar after being hit.

TV and movies are different, however, than real life. In real life, if you get into a fight with someone at a bar, no matter the circumstances, you’ll likely be arrested. Whether you’re charged with a crime depends on many factors, such as:

If you were defending yourself, then you shouldn’t be charged with a criminal offense. Otherwise, you could be charged with different types of crimes, depending on the answers to the above questions and other factors.

Many bar fights start because one or more of the participants is intoxicated. After all, that’s the main reason people go to bars – to drink alcohol. Generally, intoxication does not prevent you from being charged with a crime. If you drink, you are normally responsible for your actions afterward.

Potential Killeen and Copperas Cove charges for a bar fight

The most likely charge for a bar fight in Texas is a charge of assault:

A person commits an assault if the person:

(1) intentionally, knowingly, or recklessly causes bodily injury to another, including the person’s spouse;

(2) intentionally or knowingly threatens another with imminent bodily injury, including the person’s spouse; or

(3) intentionally or knowingly causes physical contact with another when the person knows or should reasonably believe that the other will regard the contact as offensive or provocative.

A close reading of the statute shows that intent or knowledge can be used to file a charge, but reckless conduct (which is often the case if a patron is drunk) is also grounds for filing an assault charge. Just the threat of bodily injury is enough to be arrested. You can be charged with an assault if you reasonably knew the person you fought with would be offended by the physical contact.

There are also different levels of assault. You could be charged with a felony of the third degree if:

The Texas assault statute includes other provisions that could result in charges of a felony in the second degree, a Class C misdemeanor, a Class B misdemeanor, or a Class A misdemeanor.

If the person whom you allegedly assaulted dies or suffers a serious bodily injury, you could be charged with murder, manslaughter, aggravated assault, or other crimes that will likely land you in prison for a long time should you be convicted. An experienced Killeen criminal defense attorney works to ensure this doesn’t happen.

A few other common charges arising from bar fights include:

At Mary Beth Harrell Law Firm, we understand how incidents can just get out of hand. That doesn’t mean you should be charged with a crime. The bar fight is a common example. If you get into a fight at a bar, especially if the other person agreed to the fight or provoked the fight, we work to have the charges dismissed or reduced, such as to public intoxication or disorderly conduct.

To assert all your defenses, speak with our seasoned criminal defense lawyers today by completing our contact form to schedule an appointment. We represent clients in Killeen, Temple, Belmont, Copperas Cove, Coryell and Bell Counties, and throughout Central Texas.