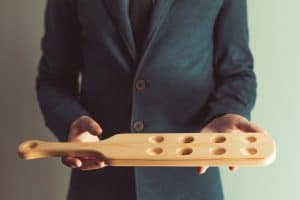 Everybody has the right to discipline their child; whether that’s sitting them in the corner to think about their actions, taking away their video game consoles and phones, or even spanking them. It’s up to the parent to decide what’s best for their child. It’s important, however, that we know what’s too much, because sometimes, “too much” can be a crime. There’s a fine line between spanking and abuse, and it’s critical to understand where that line is.

Perhaps some of us were spanked growing up, where it was the norm amongst our relatives and peers. Some of our parents even used a switch or paddle. That was some years ago now, however, and things have certainly changed. It’s time we refreshed our definitions of what’s appropriate and legal, and what’s not.

Is it legal to spank your child in Texas?

To give you the short answer? Yes. In every state, corporal punishment is legal at home, including Texas, where it is legal for a parent, step parent, legal guardian, or grandparent of the child to spank or punish the child under the law of “reasonable discipline.” The problem then becomes what defines a legal spanking, or corporal punishment. Corporal punishment has to be reasonable and not cross the line into abuse. So when does a spanking turn into something illegal?

What are the laws concerning spanking?

The main concern with spanking or other physical punishment is causing lasting harm to the child. That is not the point of corporal punishment. The Texas Penal code states a person is guilty of injury to a child if a person: “intentionally, knowingly, recklessly, or with criminal negligence, by act or intentionally, knowingly, or recklessly by omission, causes to a child (1) serious bodily injury; (2) serious mental deficiency, impairment, or injury; or (3) bodily injury.”

If the child is over the age of 14, you can be charged with assault with bodily injury of a family member.

With spanking, we accept the child suffers pain in an effort to deter them from engaging in unacceptable behavior; but pain is harm, and causing harm is illegal. So how is spanking legal? It’s because of something called Reasonable Discipline Defense. The Texas Penal Code states that the use of force, “but not deadly force, against a child under the age of 18 is justified when and to the degree the actor reasonably believes the force is necessary to discipline the child or to safeguard or promote his welfare.”

How do I discipline my child without crossing the line?

Under Texas law, it’s possible to discipline your child without abusing them. If you wish to continue to using corporal punishment, then the law requires that you do so in a manner that won’t leave lasting harm or injury. Don’t strike a child above the waist, and never with an instrument other than your hand or belt or brush. Never hit your child in anger. If you strike your child when you’re angry, you’re more likely to hit too hard or without thought. You never want to leave your child with welts, bruises, swelling, or any injury that requires medical attention.

Also consider that your child is more likely to have lasting emotional and mental damage the later in life you strike them; but if your child is younger than two years old, you’re more likely to do physical damage and cause serious injury, as well as commit a possible crime. A good age range to employ corporal punishment (if you’re going to employ it at all) is between three years old and seven years old.

What are other methods of discipline?

The best answer to all this, and to avoid being charged with abuse, is to forego corporal punishment altogether. Experts have “years’ worth of research [that] suggests spanking and harsh punishment can lead to mental health problems, cognitive difficulties, aggression, and antisocial tendencies later in life.”

If you have a very young child (a toddler perhaps), they cannot understand why they are being spanked because their brains are not developed enough to connect the consequence with the action. If you want your child to stop a behavior like throwing toys or banging a cup, then a good thing to try might be redirection. Have your child focus on something else. They’re not going to understand discipline at this age, so the best you can do is have them stop the action.

As children get older, you can start introducing discipline to them, and they will understand. Open and clear communication is important for children of all ages, even unruly teens. Set clear boundaries. Tell them what is right and what is wrong, and be prepared to explain why. Make sure you listen to what THEY have to say. Sometimes, the right way to dissuade bad behavior is to ignore the behavior altogether (so long as the child is not in any life threatening danger). And of course, there’s the all-powerful Time-Out.

If you really wish to dole out some physical punishment, consider something other than spanking like tugging firmly on a curl of hair or a swat to the hand. It’s important to focus on what you want for the outcome of the punishment. But be calm and have a clear reason.

Raising children is not easy. It’s one of the most difficult things you can do. Sometimes, we need to show children what’s right, wrong, and what can get them seriously hurt. Spanking and corporal punishment is often used in such a way, but you need to make sure that if you’re going to strike your child, you do so in a way that does not break the law, and results in you being charged with injury to a child or assault.

If you’re in trouble with the law for disciplining your child, contact Mary Beth Harrell Law Firm at 254.680.4655. Our offices are located in Killeen and Copperas Cove in Central Texas. Feel free to fill out our contact form to schedule an appointment.