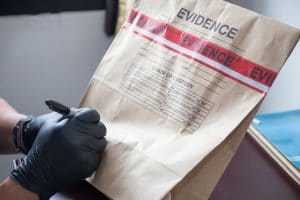 In a criminal trial, the prosecutor must present evidence that sufficiently convinces the jury or judge of the defendant’s guilt beyond a reasonable doubt. The evidence required to meet this burden of proof is often substantial and can be derived from extensive investigations conducted by law enforcement. The various forms in which this evidence may be presented include photographs, scientific analysis and findings, audio and video recordings, physical objects, digital data, and witness statements.

However, the laws in the various states, including U.S. federal laws, do not permit all types of evidence to be submitted against the defendant in court. Various rules of evidence and protections are in place for defendants that determine when evidence may be obtained and presented in court in a lawful manner. Evidence that is unlawfully obtained and presented against the defendant may lead to the wrongful conviction of that defendant. This is why it is important as a defendant to have an experienced criminal defense attorney on your case who understands how to effectively get evidence suppressed. Mary BethHarrell has won motions to suppress in state and federal courts, leading to dismissals for her clients, and has written about the subject as well:

You can find and read more of Mary Beth’s articles here.

When a judge determines that certain evidence may not be submitted at trial, that evidence is being suppressed. For this to occur, an attorney must file a motion with the court to suppress evidence.

The attorney must provide enough factual information and match that information with legal statutes to persuade the judge that the proposed evidence is illegal for submission in the case. The legal statutes offered in these motions may include state law, federal rules, case law, or the United States Constitution.

Why the need to suppress evidence?

As a defendant facing potential conviction in serious charges, the suppression of just the right evidence can persuade a jury to reach a verdict of acquittal in your case at trial. It may even lead to the dismissal of your charges before the trial starts. This can happen in a drug case in which the drugs were obtained illegally by law enforcement. The defense can file a motion to suppress the illegally obtained evidence. With that evidence out of the picture, the prosecution may determine it cannot prove the drug charges beyond a reasonable doubt and proceed to dismiss the charges.

In the discovery phase of a criminal trial, defense attorneys are supposed to obtain and evaluate all evidence, understand how it was obtained by law enforcement, and how the prosecution intends to use it against the defendant. At this stage, an experienced criminal defense lawyer will be able to determine if a reason exists to file a motion to suppress any of this evidence.

Prosecutors sometimes attempt to admit evidence based on uncertain scientific support. This may include evidence involving bloodstain patterns, fingerprints, DNA, or eyewitness identifications. The reliability of such evidence is often questioned by defense attorneys and may be the object of an evidence suppression request to the court.

Evidence may be mishandled in the forensic lab, for instance in DUI cases. A blood test may show that the defendant had a blood-alcohol content above the legal limit or other drugs in his or her system. In these cases, improperly handled evidence may include improper storage, switching or mislabeling of samples, the use of uncalibrated testing equipment, failure to properly and promptly record results, and other errors that may result in unreliable test results and evidence that is not admissible at trial.

Often there are various types of evidence that should be suppressed from inclusion in a criminal trial. It takes an experienced criminal defense attorney to recognize the evidence that is unlawful and can help save the case of the defendant. At the Mary Beth Harrell Law Firm, we employ evidence suppression among other strategies to pursue the best possible outcome in your case. To request a free consultation about your case, give us a call today in Killeen, Copperas Cove, Waco, and the surrounding areas at 254.680.4655, or visit our contact form.