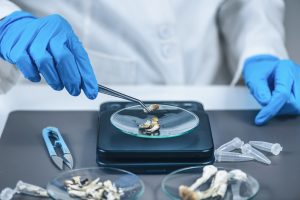 The Texas Tribune recently reported that former governor Rick Perry made a return to the Capitol to support a bill calling for a clinical study of psilocybin, commonly known as the active ingredient in “magic mushrooms.” This study is aimed specifically at evaluating the efficacy and safety of psilocybin for treating veterans suffering from post-traumatic stress disorder (PTSD).

Introduced by State Representative Alex Dominguez (D-Brownsville) House Bill 1802 would, according to the Tribune, “direct the Health and Human Services Commission to conduct the clinical study of psilocybin in partnership with a health sciences university and a Veterans Affairs hospital. The proposal would also ask HHSC to do a literature review — a survey of prior studies — of using not just psilocybin but also MDMA and ketamine to treat PTSD in veterans.”

Texas is historically an anti-drug state, and Rick Perry describes himself as “historically a very anti-drug person,” but he has come to believe that medicinal doses of psychedelic drugs can be effective in treating PTSD and depression. Perry told the Tribune, “All of that properly done in the right type of clinical setting will save a multitude of lives. I’m convinced of it. I have seen it in enough of these young men.”

“The right medical oversight and dosing”

During a press conference where Perry covered by KVUE News, he explained his change of heart:

Back in 2013, I had a mother come in and visit with me about the medical use of marijuana. I was against that. But she came in and she showed me where her young son could … get over these epileptic seizures by the use of this compound that was overseen medically, appropriately dosed, and that’s what we’re talking about here with this compound of psilocybin in a clinical trial environment. With the right medical oversight, the right diagnosis, the right dosing … working them through this experience and then the right follow-up … these compounds are different than no other compound that we would have in our arsenal.

Under the terms of the bill should it become law, the Health and Human Services Commission (HHSC) would be required to submit quarterly progress reports on the study. A final report would be due on December 1, 2024, delivered to what’s called “The Big Three” – the governor, lieutenant governor, and House speaker. This also includes members of both chambers. The bill was filed on February 10 and placed on the General Calendar on May 5.

KVUE also reports that approximately 20 veterans lose their lives to suicide every day, with those deaths often linked to PTSD and traumatic brain injuries. Other countries have used psilocybin to treat these types of disorders with successful results.

What is psilocybin? Is it legal in Texas?

Psilocybin and magic mushrooms (or “shrooms”) fall into Penalty Group II, along with other drugs including bath salts, MDMA, ecstasy, and other hallucinogens. The penalties for being caught with magic mushrooms are severe – depending on the amount, an individual could face from 180 days to two years in jail. Possession of 400 grams or more is a felony crime and could result in five to 99 years in prison with fines up to $50,000.

What if I’m arrested for possession of mushrooms in Texas?

If you are arrested for possession, use, distribution, or growing of psilocybin, you will need an experienced drug defense attorney. Penalty Group II drug convictions can have serious consequences, and it is important to get in front of your case as soon as possible. First, remember, an arrest is not a conviction.

Authorities have the burden of proof – the proof that the substances were actually yours, that you had the intent to sell or distribute, etc. It is also important to establish whether or not your Constitutional rights were violated at any point during a search or during your arrest. An attorney can also determine whether the chain of evidence is solid or if it was tampered with at any point during the process.

Some progressive district attorneys are finding their way into Texas government, like José Garza, the current DA in Travis County. Garza promises to end low-level drug prosecutions, rejecting cases involving the sale or possession of a gram or less – regardless of the substance.

Garza told the Texas Observer, “If we’re serious about addressing the root cause of substance use disorder, we need approaches that we know work and that focus on overdose prevention. It’s an illness, and you can’t truly address it through the criminal legal system.”

The drug charge defense attorneys at the Mary Beth Harrell Law Firm work with both first-time offenders and those with repeat charges. We understand the criminal justice process from the inside and work to minimize or have your charges dropped altogether. To set up a consultation, call us today at 254-680-4655 or visit our contact page. We proudly serve clients from our offices in Killeen and Copperas Cove.