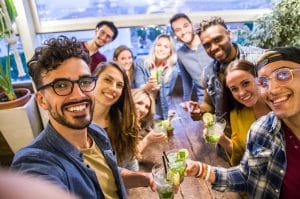 Many people use the holidays as a reason to drink a little more often, or in greater quantities, than they normally would. One holiday where celebrations and drinking go hand-in-hand is New Year’s Eve. People gather around to celebrate the start of something new. Many employers and friends host parties until well past midnight to celebrate the New Year.

There’s nothing wrong with drinking, but drinking and driving is against the law. Drunk driving, especially during a major holiday like New Year’s Eve or New Year Day, is a leading cause of deaths and fatal accidents.

Some of the many reasons New Year’s Day celebrants are likely to be arrested include:

Drivers who are stopped by a police officer will be asked to submit to field sobriety tests that test their ability to focus and keep their balance. If a driver fails a field sobriety test, he/she will be asked to take a breathalyzer test. If your blood alcohol content (BAC) level is .08 or more, you will probably be arrested for a DWI. You can be arrested even if your BAC is under .08.

Suggestions for driving during the holidays

To reduce the risk of being arrested for a DWI, drivers should:

Defenses to a DWI arrest in Central Texas

A skilled Killeen defense lawyer asserts numerous defenses for anyone arrested for a DWI during the holidays – or any time. Common defenses include:

At Mary Beth Harrell Law Firm, our DWI attorneys have more than 20 years of experience fighting for the accused. In DWI cases, we seek to suppress the evidence against you, obtain dismissals, obtain an acquittal, or negotiate a just plea bargain with your consent.

If you’ve been charged with a DWI for driving on New Year’s Eve or Day, or any other holiday, you could be sentenced to jail, lose your license, ordered to pay fines, and might be ordered to install an ignition interlock device. To talk with a respected DWI lawyer in Killeen or Copperas Cove, call us at 254-680-4655 or use our contact form to make an appointment. We proudly represent clients throughout Central Texas.