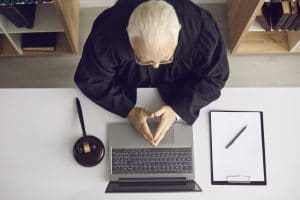 When the world shut down in March of 2020, courts across the nation had no choice but to halt legal proceedings and trials as a safety precaution. At the start of the new year, courts were struggling to find a way to hold trials in a safe environment.

Bell County is looking to resume trials this month, and it could not have been a better time. There is a backlog of cases that are estimated to set the system back years. As the courts get ready to resume trials, we thought it a good time to address some of the questions we have been hearing the most from clients as well as friends and family.

Courts across the country are taking exhaustive steps to protect everyone. Some of these include:

Now that Governor Abbott has lifted the mask mandate, the courts are free to do the same. Judge Gordon Adams, head of the 169th District Court in Bell County, says he has dropped all mask requirements for visitors, and at least some other courts will follow suit, we assume.

A revised emergency order put an end to state safety reviews, but it does allow for local officials to make their own decisions regarding masks and social distancing. In federal courthouses, only vaccinated individuals may go unmasked. As it is not illegal to ask for vaccination status (nor is it a violation of HIPAA laws), if you are not yet vaccinated and have an appointment in a federal courtroom, make sure to bring a mask with you.

It is in the best interest of everyone to adhere to these guidelines to remain hopeful the coronavirus dissipates.

Are there any alternatives to resume trials in a safe way?

Many courts are beginning to open and resume daily operations, but others are taking another approach through remote trials. During the past year, the courts looked on as bench trials, hearings, depositions, and even jury trials were successfully conducted through virtual conferences. Jurors, attorneys, and involved parties participated from home or offices.

Are virtual trials as “good” as in-person trials?

When things go wrong during a virtual trial or hearing, those errors tend to pop up on the evening news. As such, it is understandable that some people may distrust virtual trials. There are, however, some benefits to “Zoom Court.” According to some research, online court hearings have increased participation in the system, because they do not need to take off of work or find childcare if they need to appear. Court Administrator David Slayton told The Atlantic that “In Texas, 60 to 80 percent show up online [for jury duty]. That’s twice as many as formerly appeared in person.”

Of course, not all aspects of virtual court are beneficial. Not all people have equal access to computers or internet, which can limit their access to justice. It is challenging to pick a jury pool from a sea of heads on Zoom. You cannot know if someone is influencing the actions of a witness. You cannot ensure that the people involved in the trial are paying full attention when they have distractions at home. Technical difficulties, poor WiFi, and hackers are all a real concern for virtual trials – and as we learned from the early days of SCOTUS online, you never know when someone in the house will use the bathroom and unexpectedly interrupt your proceedings.

Are virtual hearings and trials as “good” as in-person hearings and trials? It depends on the nature of the trial, we think. Zoom Court may be great for a traffic ticket, but there are distinct disadvantages to virtual court when a defendant is facing a felony charge for aggravated assault or murder.

How long is it expected to take for courts to catch up on backlog?

Expected time length varies, depending on the state, size, and the number of cases presented to the court. Judge Adams believes it will take anywhere from two to three years to catch up on the backlog. Jeff Buuck, chief deputy for the Bell County Sheriff’s Department in Texas thinks it will more likely take between three and six years.

In Hays County, the District Attorney said that even with in-person jury trials resuming, it could take years to get through the backlog of cases on the docket. Jails have “been releasing people on [Personal Recognizance] bonds, and a lot of these people committed violent crimes,” Hays County District Attorney Wes Mau said. “So, not only are victims faced with, ‘My trial isn’t going to happen anytime soon,’ but the perpetrator is out of jail on bond. That obviously creates additional anxiety.”

Are you concerned about your pending criminal case being put on hold because of the COVID-19 pandemic in Texas? If so, it’s time for you to speak with an experienced Killeen criminal defense attorney from the Mary Beth Harrell Law Firm. Call our office at 254-680-4655, or complete the contact form to schedule a consultation. We have offices in Killeen and Copperas Cove to better serve clients throughout the state.